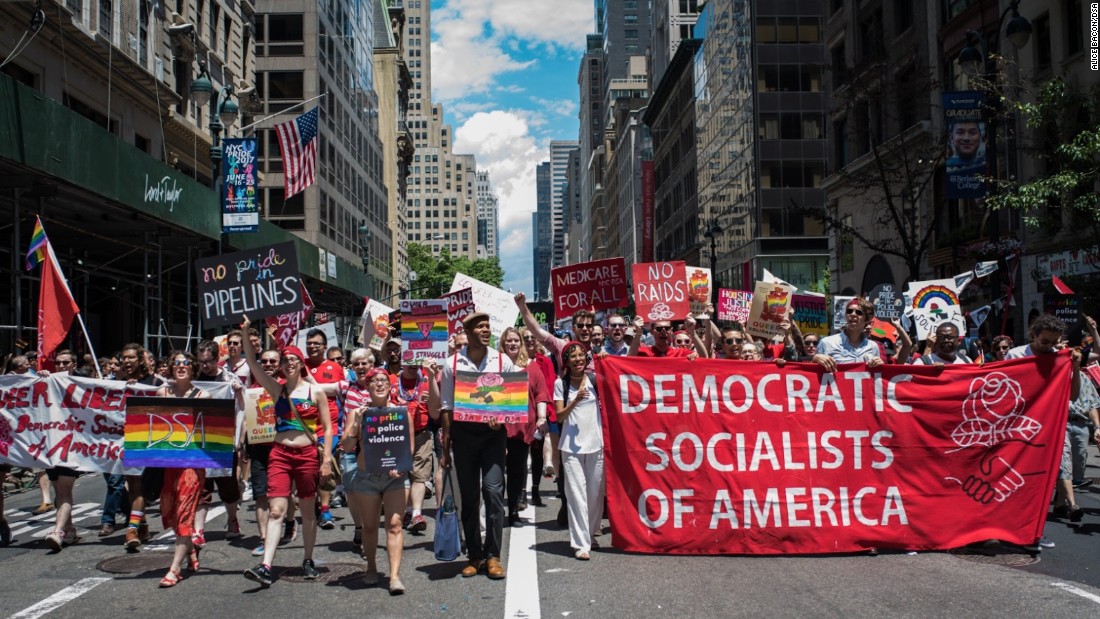 Atlanta (CNN)On the night Donald Trump won the presidency in 2016, the Democratic Socialists of America had about 8,000 dues-paying members. By the time the group opened its 2017 convention the next summer, its ranks had grown threefold.

More remarkable than its growth, though, is DSA’s increasing presence on the electoral stage. Nearly 100 democratic socialists now hold office at almost all levels of government, from local school boards to the US Congress, where freshman Reps. Alexandria Ocasio-Cortez of New York and Michigan’s Rashida Tlaib are at the front line of the fight over the Democratic Party’s future — and independent Sen. Bernie Sanders of Vermont, though not directly affiliated with the group, is mounting his second campaign for the party’s presidential nomination.
DSA is not a political party, despite the push by some of its members to form one. But two years after delegates in Chicago debated whether, and how far, to engage in elections, it has emerged as an organizing force up and down the ballot. In March, DSA members voted overwhelmingly to endorse Sanders’ presidential campaign, a decision that — while hardly unexpected — represented its boldest step yet into the mainstream political forum.
But in entering the current election cycle with such gusto, DSA also ramped up the internal divisions simmering within its rank and file. Many of those disputes mirror the ones facing the Democratic Party — the very party DSA is dedicated to radicalizing from the inside out.

Ideology repeatedly clashed with electoral pragmatism during this year’s convention, which veered between a giddy celebration of the group’s previously unfathomable successes, delegates’ passage of Green New Deal and open borders initiatives, and painful deliberations over how to harness its new power.
Two votes during the first 24 hours of the gathering put those questions on display. The first asked what to do in the event Sanders fails to win the Democratic nomination; the second considered imposing a litmus test on candidates seeking DSA’s national endorsement.
The results were, in effect, a split decision.
On Friday, delegates narrowly passed a proposal that will prevent DSA from backing anyone but Sanders in the next presidential race. The argument in favor was simple: DSA is a socialist organization and risked spoiling its authority on the left by publicly backing — as Andrew Sernatinger, a delegate from Wisconsin, argued — “a candidate that is a neoliberal that is not what we are for.”
“All I’m saying in this resolution is we’re not going to endorse another Democrat,” he said. “I’m not saying that you can’t vote for whoever you want to vote for, do what you need to do.”
The arguments against — voiced on the convention floor — centered as much on timing as substance.
“Trump is just too dangerous for us to take cards off the table right now,” said David Duhalde, DSA’s former deputy director, who more recently worked as the political director for the Sanders-backing group Our Revolution.
The resolution passed by a narrow majority, but there was more audible grumbling than gloating afterward.
On Saturday morning, as the backlash built up online, the group put out a statement reminding reporters that while it did not endorse Hillary Clinton in 2016, DSA had “adopted a strategy to ‘Dump Trump’ in swing states.”
For DSA’s senior leadership, the growing pains highlighted during the three days of often-protracted debate and parliamentary wrangling in Atlanta are a price they seem willing to pay — a natural outgrowth, national director Maria Svart argued, of their commitment to democratic organizing.
“Some organizations are just debate societies and some organizations go out and canvass for whoever the candidate is. We actually want to change the system,” Svart told CNN. “We want to transform our relationship to the capitalist class; we are doing something new. And so there’s going to be tension between pragmatism and idealism. But that’s what’s actually beautiful about DSA, is we figure out how to have that balance in any given moment based on the conditions.”
Like many others in and around the convention, Lucie Macias, from the Chicago DSA chapter that has helped elect six democratic socialists to a city council of 50, said the vote shouldn’t be read as a blanket rejection of any future nominee.
“I think an organizational endorsement is very different than what people are doing as individuals. A lot of times people just throw this out, that we didn’t support Hillary,” she said. “I didn’t canvass for Hillary personally, but I voted for her.”
In private conversations outside the convention hall, most delegates said they would vote, and potentially canvass, for Elizabeth Warren if she were the nominee. Some expressed a genuine affection for the senator from Massachusetts. But others, pointing to her identification as a capitalist, suggested their openness was rooted in a recognition that being viewed as “Bernie or Bust” would alienate potential allies. The organization’s already growing numbers have thrust it into the crosshairs of mainstream Democratic politics, where anything short of a pledge to unreservedly back the party’s eventual nominee is a nonstarter.

Sanders, the country’s best-known democratic socialist, has repeatedly said he will support the Democratic primary winner — no matter who it is.
On Saturday, during a news conference with about 20 elected officials from around the country, including a number from traditionally Republican strongholds, there was a mix of tough talk and cautious reminders that Trump’s reelection would undermine both the organization’s short- and long-term goals.
City councilman khalid kamau, of South Fulton, Georgia, warned that the tone of the argument over democratic socialism during the Democratic debates risked alienating DSA’s super-charged activists.
“You can’t disparage socialism in this primary and come back six months from now and ask us to vote-blue-no-matter-who,” he said. “So that’s my warning to the Democratic establishment.”
But there was near consensus among the elected leaders that even if Sanders falls short, defeating Trump should be DSA’s first priority — no matter what strategy it chose.
“The role for DSA in 2020 is to un-elect the individual that’s occupying the Oval Office right now,” Maryland state Del. Gabriel Acevero told CNN. Chicago Alderman Daniel La Spata, who represents the city’s 1st Ward, said that “putting an end to the Trump administration is the greatest good that we can pursue. And I hope that we will put all of our power behind that.”
But the dedication — or inflexibility — among the slim majority of delegates who voted to forswear formally backing anyone but Sanders next year found a counterbalance when the questions facing the convention turned to local races.
The resolution to create a “litmus test” for national endorsements, which are filtered up from the local chapters, failed narrowly on Saturday after an organizer from the host state made an impassioned plea to the delegates.
The proposed 14-point questionnaire was mostly uncontroversial, at least to any candidate who would seek DSA’s support, asking whether they support single-payer “Medicare for All,” universal tuition-free child care and the Green New Deal. But the deal breaker, ultimately, was its requirement that candidates declare themselves “democratic socialists” — a designation the Georgia-based delegate warned would “cut our legs out from under us in the South.”
“What I see is forcing our candidates into a death sentence,” the delegate said, “because we have people who don’t understand what socialism is here yet. We need people who are going to endorse our values even if they are not willing to say explicitly they are democratic socialists.”
Tristan Rader, a city council member in Lakewood, Ohio, applauded the convention’s decision to vote down the litmus test.
“I come from a very blue city that voted for Bernie Sanders in the primary, voted for Hillary overwhelmingly. I have no problems being an out democratic socialist running as a democratic socialist,” Rader said afterward. “In my city, that works. Other places in Ohio that may not work. (Candidates) may share those values, but there may be some reservations about using some of that language, and local chapters should absolutely be able to set their parameters and make good decisions based on where they are in the country.”
Duhalde, the former DSA No. 2, also opposed the resolution. He pointed to DSA’s increasing size and worries that circumscribing its pool of candidates would do the same to its influence and ability to back officials like Rep. Ilhan Omar of Minnesota, who would have been disqualified from seeking a DSA endorsement if the resolution passed.
“Rep. Omar has been such a fantastic representative, and so under attack, and then for DSA not to be able to support her, I think it’s changing a lot of opinions,” Duhalde said. “Her as an almost symbolic force, in many ways, is making people reconsider whether that label really matters.” This book is for anyone -- man or woman -- who wants a proven, developed-in-the-trenches 'field manual' for getting down to 6-8% b[...]
Read More
⇛ view similar products
The Single Digit Body Fat Manual

This book is for anyone -- man or woman -- who wants a proven, developed-in-the-trenches 'field manual' for getting down to 6-8% b[...]
Read More
⇛ view similar products
Write Million-dollar Copy - Instantly

Essential instructions have been gathered together and condensed into one easily accessible version - saving you hours of trawling[...]
Read More
⇛ view similar products
Make Sketching Your Hobby

Essential instructions have been gathered together and condensed into one easily accessible version - saving you hours of trawling[...]
Read More
⇛ view similar products