Unlike the Dolphins, the Jets and Washington are losing without purpose or any semblance of a plan for the future 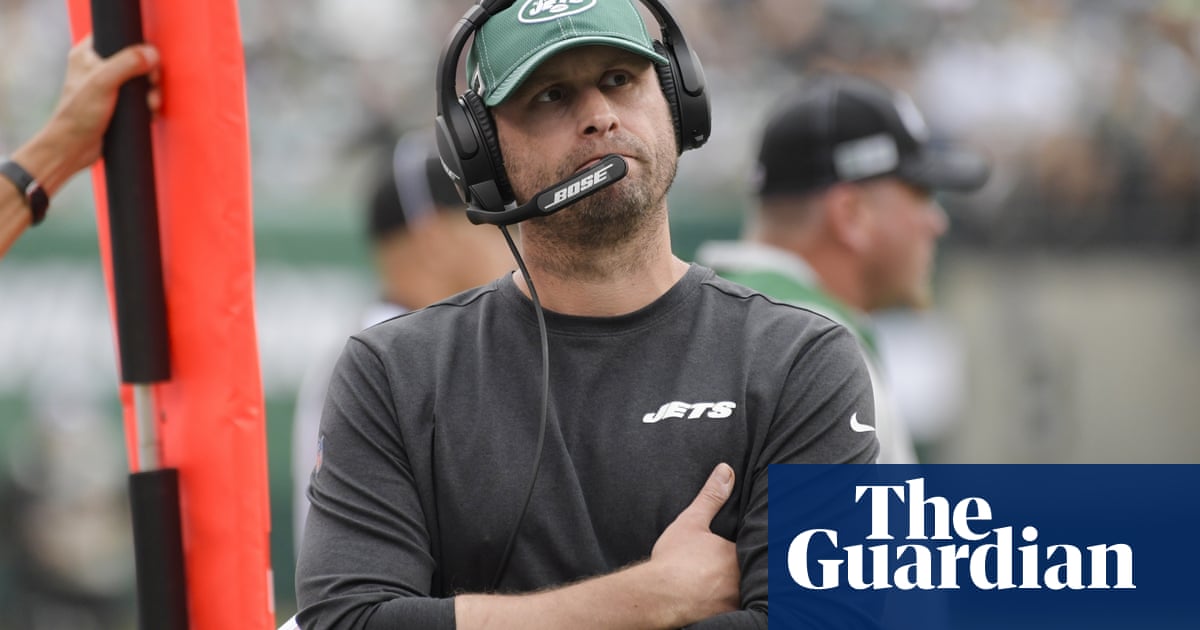 A few weeks ago after watching the Dolphins and then the Jets suffer their latest embarrassing, soulless losses, I posed a question on Twitter: Is it better to be a Dolphins or Jets fan? For a fleeting moment all the misery felt equal, after all, losing is losing, right? But after some thought, some enlightened responses and a little more perspective, it turns out Dolphins fans are living the dream compared to Jets fans and a number of other fanbases that again had to suffer through their teams hell in Week 5. Most of this years crop of bad teams including the Jets, Washington, Bengals, Falcons and to an extent the Cardinals and Steelers look especially egregious this season. In large part thats because, unlike the Dolphins, they are losing without purpose or any semblance of remedy.

Miami, to their credit have been honest about this lost season. GM Chris Grier already said this years Dolphins werent built to win a Super Bowl. They gutted their franchise, all while getting to examine whether Josh Rosen is a viable option under center. Next April they will undergo a major rebuild with three first-round draft picks, possibly two in the top 10, and a decent amount of cash to spend in free agency. While thats not ideal for current veterans at the tail end of their careers, the Dolphins are at least dripping in hope. Just look at the Raiders, who were mocked after undergoing a similar strategy last season. Now theyre 3-2 with a young, exciting team only poised to get better.

Meanwhile the Jets now sit at 0-4. Sundays 31-6 loss to the Eagles was the latest low point under Adam Gase. While Gase cannot be blamed for the absence of their starting quarterback Sam Darnold through illness, he can be blamed for how he has reacted to that loss. On Sunday, the offense was woefully unprepared, including starting quarterback Luke Falk, who Gase oddly decided not to have practice with the first team at all last week. The Jets offensive line played as if still on a bye, allowing Falk to get sacked NINE times.

Well break the huddle and guys were not getting lined up, running back LeVeon Bell told reporters. Thats on Gase.

The Bengals, meanwhile, fell to 0-5, losing to the previously winless Cardinals 26-23 in a game that was far more lopsided than the box score suggests. Theyve lost close games like Week 1s one point loss to the Seahawks and theyve been blown out. But they lose with a vanilla offense and largely the same cast of characters that Marvin Lewis also lost with before being replaced by Sean McVays buddy Zac Taylor. Taylor was flatly outcoached Sunday by the offseasons most questionable coaching hire, Kliff Kingsbury. Its strange to group the Falcons with some of these teams given their roster talent, but heck, theyre 1-4 and Dan Quinn is spinning his wheels. Atlanta need a spark and the status quo isnt it.

Then there are the talented players wasting their primes in the directionless pit that is Washington. Head coach (at the time of writing) Jay Gruden has been unable to concoct a viable winning blueprint and, like Gase, seems to be throwing darts when it comes to quarterback. Asked Wednesday about the teams plans at quarterback for the game against New England, Gruden said, We dont have one right now. At least hes honest.

Each of these franchises has its own recipe for failure but aside from Arizona none have an acceptable right now plan. While temporarily painful, Dolphins fans can stand pat with this seasons crew, perhaps dissecting who will be part of the new and improved 2020 Dolphins. You cant fairly examine Brian Floress worth as a coach this season or grade Grier on his hire and draftees until the process plays out. But there is a process.

For the Bengals, Washington, Jets and to an extent the Falcons this season already feels numb, like a strange nothingness that just needs to end. Its torturous to watch Washington and Falcons collect penalties each week like theres a prize at the end. Its infuriating to observe certain QB-starved teams not smart enough to consider checking in with Colin Kaepernick to see if hes in football-ready shape.

Maybe AJ Green will get traded for a first-round pick and somehow it will alter the Bengals season or a new coach will light a fire under Washington. But for now, far too many are teams are vying for the NFLs most hopeless award, and its torture to watch. I cant imagine what its like for the fans.

Stat of the week

169 rushing yards for the Oakland Raiders. Oaklands stunning 24-21 defeat of the Chicago Bears in London came on the legs of Josh Jacobs and an effective rushing attack unlike any the Bears have seen in some time. Sundays contest was billed as showcasing the dominant Bears defensive line and why the Raiders royally mucked up when they traded away Khalil Mack last year. Chicagos run defense had been immense, allowing 61.5 rushing yards per game and only one rushing touchdown. The Raiders changed that narrative with Jacobs fighting for extra yards and finding open lanes on his way to 123 yards and two scores. DeAndre Washington added another score on the ground. The Raiders are now an impressive 3-2. Given the Bears recent history and defensive line depth, Sunday will likely be chalked up an anomaly. Still, it was stunning to see any team have an effective rushing attack against this group.

Co-MVPs of the week

Christian McCaffrey and Deshaun Watson. McCaffrey continues to be to rushing what Patrick Mahomes is to quarterbacking: a generational talent who is delightful to watch. In a tight game against the feisty Jacksonville Jaguars, McCaffrey was again the difference maker for Carolina, accounting for 237 yards of offense and three touchdowns (including an 84-yard burner). Since Cam Newton was injured three weeks ago, McCaffrey has racked up 604 yards and five touchdowns. The Panthers are 3-0 in that span.

Watson absolutely annihilated the Falcons defense in a 53-32 win for the Texans. Watsons stat line was literally perfect: 426 passing yards, five touchdowns, no picks and a 158.3 passer rating. One of the only troublesome spots for Watson came on in the first-quarter when the scrambling QB fumbled, then picked up the ball and ran for the first down. It was that kind of day for Watson who is quickly becoming one of the NFLs great quarterbacks. Atlanta have a confoundingly bad secondary and Watson knew how to take advantage of every opportunity, of which there were many.

Quote of the week

Gruden was the preseason favorite to be the first coach shown the door this season. An 0-5 start later, including Sundays lopsided 33-7 loss to the Patriots, and Grudens days may be numbered. Washington actually jumped to an early 7-0 lead and stymied the Patriots offense for much of the first half. The second half was a different as Washington were plagued by miscues, any lack of offensive wizardry and the Patriots waking up. Gruden sounds like he understands his fate after a dismal 21-26-1 record and wouldnt mind if his key stopped working sooner rather than later.

Video of the week

Unfortunately, this weeks video isnt a thrilling play. In chilling footage that will not exactly help declining participation rates in youth football, Steelers quarterback Mason Rudolph was sandwiched by monster hits from Ravens safety Earl Thomas and corner Brandon Carr. Rudolph crumbled to the ground and lay motionless as teammates frantically waved over medical personnel. It was an emotional few minutes before Rudolph walked off the field. He was immediately ruled out of the game with a concussion. Later on, Broncos cornerback DeVante Bausby suffered a similar fate and left boarded to a stretcher after colliding with teammate Alexander Johnson in their contest against the Chargers.

NFL players are only guaranteed a sliver of their contracts. Dangerous moments like Sunday underscore why we should support players who hold out in a quest to secure every penny possible. This sport was not meant to be played by human beings. Those who risk their present and future every week for our viewing pleasure should be heavily compensated.

Elsewhere around the league

Aaron Rodgers has been good this season, rather than the spectacular player we are used to. But the Green Bay Packers are in a good position because this season Rodgers actually has a supporting case to help him out. On Sunday, it was Aaron Jones who stepped up, scoring four rushing touchdowns. The defense also intercepted Dak Prescott three times, as the Packers beat the Dallas Cowboys and moved to 4-1.

The Kansas City Chiefs lost their unbeaten record to the Indianapolis Colts. The Colts seem to be doing pretty well after Andrew Lucks retirement, and their offensive line and defense were superb all night.

It was a drama-filled week for the Vikings passing unit. Adam Thielen called out Kirk Cousins for not hitting the deep ball in last weeks loss to the Bears. Cousins apologized to Thielen on a podcast a few days later. Meanwhile, a reportedly disenfranchised Stefon Diggs racked up $200,000 in fines for unexcused absences from practices and meetings while teams started inquiring about a trade. Well, Cousins responded with his best performance this season, executing his part in a 28-10 thumping of the New York Giants. Cousins hit Thielen seven times for 130 yards and two scores. Diggs was targeted less often and only caught three passes for 33 yards. Still, he seemed pretty jazzed to participate in one of the NFLs best touchdown celebrations this year. The Giants have a dismal secondary and Diggs winked when declaring he wanted to stay in Minnesota in the postgame so the positivity could be temporary. But Sunday was a much needed Band-Aid for the Vikings.

Teddy Bridgewater continues to shine in Drew Breess absence, this time in a tight divisional 31-24 win over Tampa Bay. Bridgewaters number were astounding, very Brees-like in fact with 314 yards and four touchdowns. The Saints are 3-0 under Bridgewater, all crucial wins over the Seahawks, Cowboys and now Bucs, and all three game were decided by less than a touchdown. The Saints quarterback situation is nothing short of idyllic especially when compared to so many other depleted franchises.

The Ravens were once again saved by the exquisite kicking of Justin Tucker in their 26-23 win over the Steelers. Tucker was four-for-four on field goals, including the game-winning 48-yarder in overtime. He continues to be a rock at a position that has plagued a plethora of franchises. See the Titans, who watched Cairo Santos miss FOUR field goals Sunday.