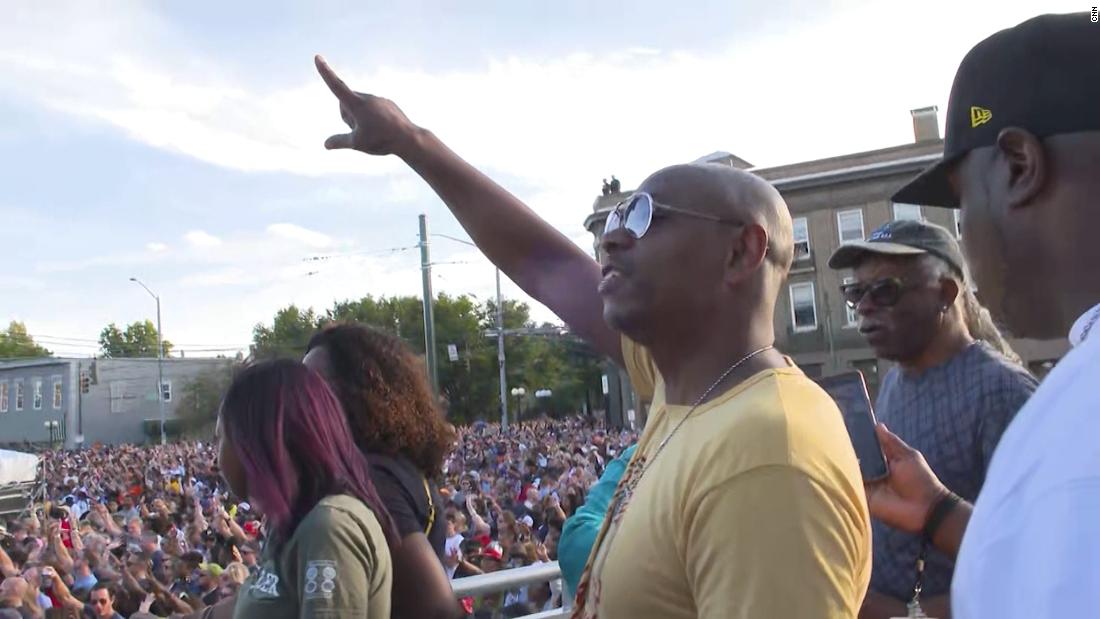 Dayton, Ohio (CNN)Comedian Dave Chappelle is hosting a free benefit concert for Dayton, Ohio, on Sunday to honor people killed in this month’s mass shooting and to benefit families and survivors.

Chappelle — a resident of Yellow Springs, Ohio, about 20 miles outside of Dayton — took the stage Sunday evening to cheers and applause, telling the crowd, “Today we’re going to show the world that nothing will get us down.”
“Dayton, Ohio, no matter what’s going on, no matter how tough these times get, we hold our heads up high, because we know what we’re about,” he said.
“And we’re not just doing this for our city,” he added. “We’re doing this for every victim of every mass shooting in our country.” 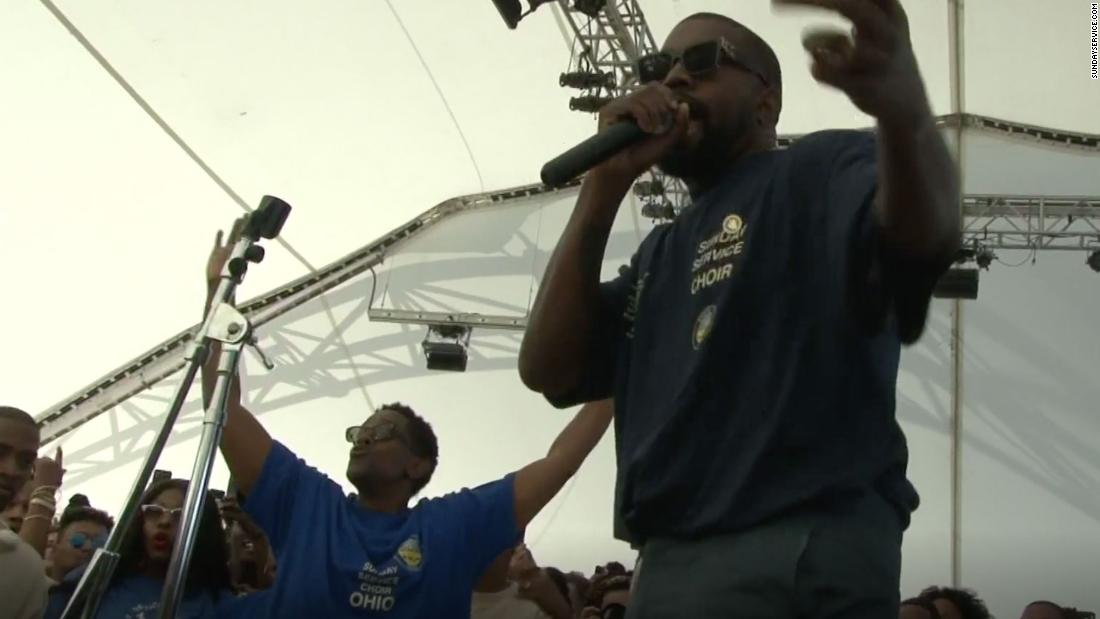 The event’s being held the day after the comedian’s birthday, and at the event, Dayton Mayor Nan Whaley handed Chappelle a birthday card and told him the city had declared Sunday “Dave Chappelle Day” in Dayton.
“You heard it here first,” Chappelle said. “Keep the kids out of school, it’s Dave Chappelle Day.”
The artist Thundercat was first to take the stage in what’s expected to be a star-studded affair that will stretch into Sunday night.
Additional performers have not been announced. Rapper and producer Kanye West was in Dayton’s RiverScape Metro Park on Sunday morning, hosting his Sunday Service. His wife, Kim Kardashian West, tweeted a link to the performance, writing, “In support of the victims and survivors of the Dayton mass shooting.” Stevie Wonder was also in attendance at the concert.
Whaley announced the concert Wednesday, adding that people unable to attend can donate to the Oregon District Tragedy Fund.
Sunday’s event takes place from 4 to 10 p.m. It is free, but tickets were required and were previously distributed. No more will be available, the event page said.
According to WDTN, organizers expect the event to draw thousands of people and have warned it could reach capacity. A ticket does not guarantee entry, the station reported.

‘These are people’s lives,’ Chappelle says

“Dayton had a tough year,” Chappelle told CNN in an interview, pointing to a rally by a small group affiliated with the KKK, a tornado that devastated parts of the area and then this month’s shooting. “Locally, there’s a determination to not let that define us and to shake the fear.”
The comedian was on tour and about to step out on stage, he said, when he got a news alert about the shooting, just miles from his home. “I couldn’t believe it,” he said.
“Something like this happens in your city … it makes it all very real,” he said. “You realize these aren’t numbers, these are people’s lives.”
The next morning, he said, he called the mayor and planning for Sunday’s event got underway.
“We just got to be kind to each other — deliberately and willfully kind, even when it’s hard to do,” Chappelle said.
Comedian Jon Stewart told CNN Sunday that Chappelle called him last week to attend the concert.
“He’s from this area, he’s from this community. He was hurting,” Stewart said. “He was beside himself and had this idea to reclaim the Oregon District for the people who live here and to take that terrible memory and recreate a new one and that’s what’s been occurring.”
Stewart added “having the support of other communities and the people around is really crucial to that idea of not allowing those types of terrorist acts to define your city, your people or anything along those lines.”

A Facebook page for the concert, which is hosted with the help of city organizations such as the Dayton Area Chamber of Commerce, said it also hopes to help city residents “reclaim” the Oregon District, a popular nightlife destination.
Whaley told reporters Sunday that no taxpayer dollars were spent on putting on the event — her office and the Chamber of Commerce raised the money for event security. And Chappelle provided the stage and brought the talent that would perform, she said, calling his contribution to the city “a tremendous gift.”
“We like to build community,” Whaley said, “and that’s an honor to do for the city.”
Twyla Southall, whose brother Derrick Fudge died August 4, told CNN affiliate WDTN she’s looking forward to show and that she hopes it will help her family process the tragedy.
“With the sea of people and the celebration that will be going on, I think it will make it a lot more bearable,” she told the station. 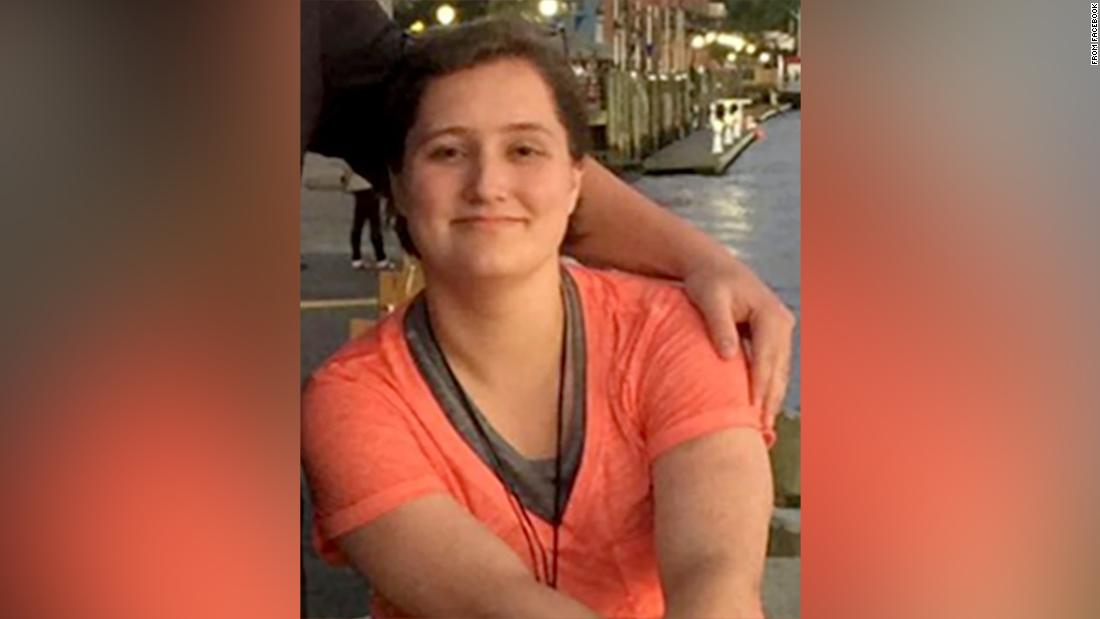 Long lines began forming Sunday afternoon as attendees waited to get into the event. Among them was Cathy Parson, whose niece was in the Oregon District at the time of the shooting, she said.
Parson told CNN she was hoping the event would help the community “come together and warm everybody’s hearts,” adding she was “so grateful” to Chappelle for putting on the event.
“I’m just here to have a good time,” she said.